With the goal of strengthening the Katarungang Pambarangay (KP) in the CALABARZON region as an indigenous conflict resolution structure at the community level, DILG Region IV-A in adherence to Executive Order No. 394 s. 1997 spearheaded last July 28, 2014 the conduct of the 2014 Lupon Tagapamayapa Incentives and Awards (LTIA) at the Tandang Sora Hall, TESDA Women’s Center, Taguig City. 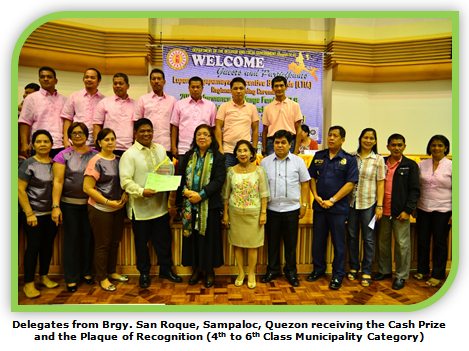 The LTIA which seeks to provide due recognition to the 2014 regional winners is in line with DILG Memorandum Circular 2008-102. The said MC serves as the basis in assessing and evaluating the performance of the Lupon Tagapamayapa in the region. The regional winners are as follows;

The Regional Winners received a plaque of recognition and a cash prize amounting to Fifty Thousand Pesos (Php50,000.00). The said amount provided by the DILG Bureau of Local Government Supervision (BLGS) will be utilized for development projects conceptualized by the barangay.

In her message to the visitors and guests particularly to the winners, DILG IV-A Regional Director Josefina E. Castilla-Go reiterated and stressed the importance of KP in dispute-resolution at the grassroots level particularly in the barangays since the LTIA was established to strengthen KP with an end result of greater public awareness on KP matters.

Partners which assisted the DILG in the said search are the Tanggol Kalikasan (TK), the Philippine Chamber of Commerce and Industry (PCCI), DOJ IV-A, PNP PRO4A, and the Liga ng mga Barangay (LnB) Region IV-A.